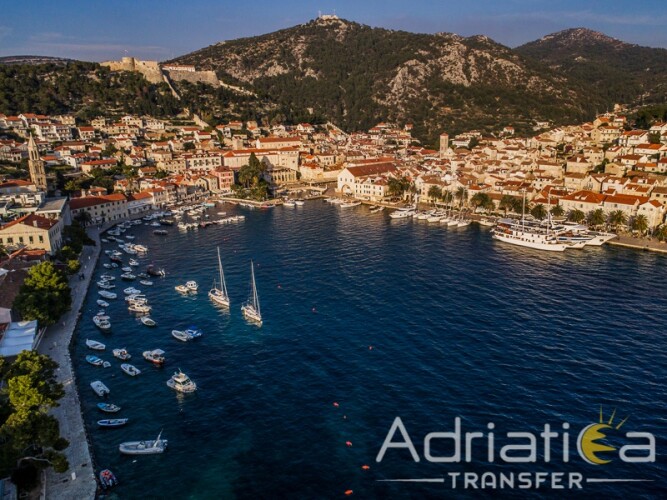 Visit and explore the most popular mid Adriatic island, Hvar. Hvar town on the Hvar island is one of the best summer vacation stops, offering something for everything.

Although Hvar is slightly busy during peak season, secluded beaches and verdant olive groves are just as common on the island as anywhere else in the Adriatic.

On the other hand, Hvar has an excellent array of restaurants, shops and hotels which is often absent on the islands. As if that’s not enough, you will find a vibrant nightlife on the island and a wealth of amenities that seem to attract the rich and famous from Croatia’s mainland.

Split boat tours run daily trips to Hvar and if you want something a little more ‘modern’, this beautiful island offers a nice mix that never fails to disappoint.

With quirky galleries, designer stores and iconic cobblestone streets, this is also very much a cultural destination. What’s more, Hvar is favored by the rich and famous for good reason.

That is to say, there is something for everyone on the island, from golden beaches and friendly locals to world-class seafood and a buzzing social scene. It’s true, featuring a long lineup of cafes and beach bars, Hvar is the most lively and socially advanced island in Croatia.

Moral of the story: Hvar might be rather busy at peak season but the variety of amenities and things to do make this an excellent stopover at the very least.

When you arrive at Hvar your eye will most probably first notice the castle that is standing on a little hill directly above Hvar, the castle is called Fortica.

The castle dates back to somewhere around 500BC and it is a ancient Illyrian settlement, the view looking down on the city and especially at night is something that you really need to experience!

Next that you will most probably visit because its in the centre is the Sqaure of Sv.Stjepan! It is pretty big, it stretches all the way from the harbour to the cathedral, and it actually covers 4500 square meters!

It also is one of the most oldest squares in Dalmatia!

Here you will see a lot of places where you can sit and have a drink, it is the city centre of course!

It is definitely worth the walk and even in the big temperatures, the path to the castle is next to a lot of trees so you won’t be burning in the sun to get to the castle, if you don’t feel like walking taxi would cost you around 100kunas (~13Eur)

Ancient Greeks where the first people to found Hvar, when they founded the colony of Pharos in 384 BC but not in the city of Hvar, in Stari Grad which is the current second biggest city on Hvar and located close to the city of Hvar.

With that in mind, Stari Grad on the island of Hvar, is one of the most oldest towns in Europe!

HOW TO VISIT HVAR

You have 3 options if you want to visit Hvar town. Besides taking a ferry from Split to Hvar, you can also join our Hvar boat tour, which stops at Hvar, Pakleni Islands as well as to Golden horn beach and Milna on the Island of Brač!

If you want to visit Hvar and Blue Cave in the same tour, then joining our Five Islands Tour is best option for you. If non of these suits you, there is an option of booking private tour to Hvar with one of our boats.