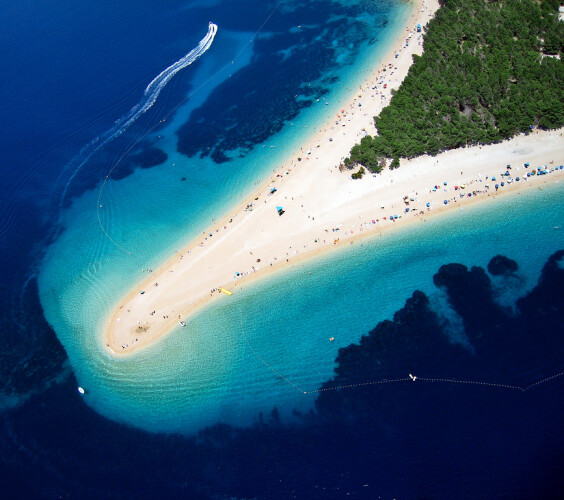 Covered in small golden pebbles, beach protrudes over 500 meters out into the Adriatic Sea. Its shape changes with sea currents and ever changing winds which provides opportunity for enjoying in different water and windsurfing activities.
FAMOUS ZLATNI RAT BEACH

Next to Hvar is the island of Brač which is home to one of the most popular beaches in Croatia, the Golden Horn or in Croatian called, “Zlatni rat. Golden Horn is a symbol of Croatia and is a popular spot for tourists and locals!

The beach is unique in shape, because it changes! The change happens only once in a few years, the whole beach shifts either right, left or stays in the middle. It moves mostly due to the wind called “Jugo” which is more known as sirocco.

Cntaveler put the beach in the top 10 best beaches in Europe.

Part of the beach, specifically the west part is actually clothing-optional!

Golden horn is one of the most photographed beaches in Croatia, the beach extends about 500 meters and it is constantly crowded with many tourists, it’s a hotspot!

The beach is close to the city of Bol, and Brac is not just the beach it is much more!

In the city of Bol you can find a gallery which displays paintings and sculpture’s from the 20th century Croatian artists, and it is a lot of paintings for such a small town with just 1,500 people!

You can see sculptor work by Ivan Mestrovic and painter Ignjat Job and the gallery is named after Dešković a sculptors who was born in Brac and was very famous for his time, you can find one of his most notable works, in the courtyard of the gallery.

About half a kilometer from the center of Bol is a Dominican Monastery from 1475, very old! And close to it are a few little chapels which are even more older! From around 9-10th century!

There is also a museum nearby where you can find manuscripts, coins and many other archaeological items that were found thru history on this island!

There is also a winery close by where you can taste the finest Croatian wines in the first co-op wine warehouse in Croatia from the 1903!

In the hills close to Bolt there is a cave called “Vidova Gora”, where a interesting and unusual set of reliefs decorates the cave`s walls, the carvings include animals, angels and a dragon! It looks like a blend of Christian and Pagan symbols. This is ideal for people that love hiking but, since the path to the cave is really complicated and really steep, the cave can only be accessed with a guided tour.

Second main attraction in Bol next to the Golden Horn beach is the “Our lady of Carmel church” which is a baroque style church built somewhere around 1668 and 1788. It has beautiful rose windows, a clock and a stone angel holding Veronicas veil over the door.

So, to sum it all up, in with our one boat tour, you can visit Bol, Hvar, Pakleni island, and Milna on the Island of Brač! Or if you want to visit just one of these locations on your own and have all the time you want, our split boat transfer will pick you up anywhere you are and drop you off wherever you want to go!