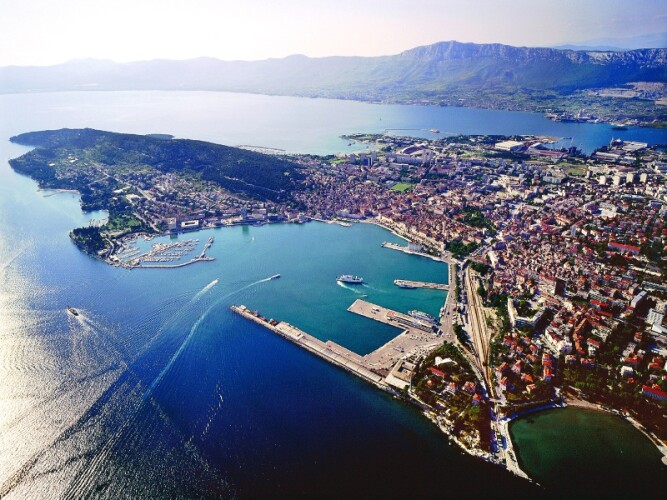 With deep roots extending far into the misty past, Croatia is an ancient nation. Another historically important site you will get a chance to see while visiting Croatia is Dalmatia, a region that is a part of World Heritage Site, and has a lot to offer to her guests with Split being the capital of Dalmatia.

You'll find that past lives on today, side by side with modern buildings and technology. Exploring Croatia will mean coming face to face with heritage and history one of the oldest nations in Europe.

Split is a city with 1700 year old history and breathes Italian, french, Greek culture which are combined with unique Croatian art and architecture. Don't miss the opportunity to visit the oldest palace on Mediterranean sea where the life still goes on. Diocletian's palace is the core of the city of Split.

- Diocletian’s Palace and the old town

Get lost in small narrow streets of the old town, climb the famous bell tower for amazing photos, take a selfie with 3500 year old sphynx, discover the cellars of emperor of Roman empire and famous Diocletian’s Palace.

Diocletian’s Palace has a 30,000 square meter with most important historical buildings. It is 1700 year old Roman Palace under the protection of UNESCO.

Diocletian Palace has diversity of its buildings, which include mausoleum, Cathedral of St. Dominus, a Temple of Jupiter, an ancient imperial antechamber of the Vestibule, and temples to Cybele and Venus.

- Cool down on one of Split beaches

Besides the beaches around park forest Marjan such as Obojena, Kašjuni, Prve Vode or Bene, there are great beaches on the rest of Split coastline. For example, there are shallow sandy beaches such as Bačvice and Firule, just 15 minutes of walking distance away from the center.

Also, you have very popular Žnjan plateau with long stretch of pebble beaches as well as beautiful beaches in surrounding suburbs of Split such as Stobreč, Kaštela and Trogir.

Although Split is metropolis of Dalmatia and the main place to visit, there are several towns around Split which have their own secrets. You have Solin which is charming small town and a location of ancient Roman city of Salona, once a capital of Dalmatia.

Next to Solin is Kaštela with its 7 medieval castles. On the western side of Split riviera is stunning city of Trogir with beautiful baroque architecture. On the eastern side, you have Stobreč and Omiš. Stobreč has wide beach and plenty of cafe bars next to the sea, while Omiš has the best beaches in the area and was home of the pirates, a long time ago.

Zipline is new adrenaline rush activity in Croatia where you descend through the canyon down the steel wire rope, secured with a belt. In one tour which lasts about three hours, you can go over the eight wires which total length is 2100m. This adventure trip, it is organised with transfer from Split, to the amazing canyon of the Cetina River near Omis.

Departing from Split, we arrive to the meeting point near the Omis, to sign the statements. First of all, you will take a basic training and a short walk in nature where you will received all the necessary equipment . After this quick training, we are taking you to the first descent on two short wires, (length 25m) , where guides will explain you how to brake and act on cable. The first descent is just a warming up, because the best is yet to come.

Then we will take a short walk to the first wire. Before each wire, one of the guides demonstrate descend, while the second guide attaches you and gives you instructions. First guide welcomes you at the beginning of the second wire. This way, if you are brave enough, you will pass all eight wires. The finish point of a zipline tour is located 50m from the road, and there this fun trip ends.

You have a wide options of day trips such as Rafting, Canoe safari, Kayaking or Canyoning that is organized at beautiful Cetina River near Split. You don't need to be experienced as there are regular tours that everyone can join.

Our Split travel guide wouldn't be complete if we didn't mention the best shopping malls which includes Joker, City Center One, Salona Mall and Mall of Split. Although shopping Center Joker is located somewhat close to the center, the best ones are Mall of Split and City Center One. These two not only have plenty of stores, restaurants and movie theaters but they are also located few kilometers apart from one another which makes your shopping tour much simpler and less time consuming.

You can also visit national parks and mid-Adriatic islands. Since they are bit further and taking a taxi or a bus isn’t convenient, you will need to have your own car or rent one, book an excursion, take a ferry or rent a boat. At the end of the day, you have plenty of options, if you decide to visit National Park Krka, N.P. Plitvice or mid-Adriatic islands such as Brač, Hvar, Vis or Šolta.

If you decide to join a boat tour or take a private one, there are 7 things you should need to know before sailing in Croatia.

If you don’t want to visit national parks, some of the islands or medieval towns such as Dubrovnik, explore rich underwater world of Dalmatia. Not only that Croatia has more than thousand islands and crystal clear sea but there are many great diving spots, thanks to long maritime tradition and turbulent history on this side of the Adriatic.

If you want more info about Split and which are top 10 things to do in Split, during summer, continue reading...